No ordinary Pork and Beaner – A pretty punchy stew.

The expression ‘pork and beaner’ brings to mind a very grim time in modern history. Depression era USA had huge unemployment with transient populations doing what they could to keep body and soul together. Any of you young enough to wonder “What is the old git on about now?” should read some John Steinbeck to get an insight into that depressing world. Back then, a ‘Pork and Beaner” was a boxer, usually old, unskilled and destined for a painful bruising, who would fight for a plate of food. Often the staple, pork and beans.

Now, I enjoy a good punch up every now and again. Though, it’s a while since I have pulled on the gloves to settle a score. This concept was introduced for a very brief period in my junior school. I got one go at it and won convincingly, knocking six shades out of my classmate. In the intervening decades, we have become a lot more civilised and tend not to encourage the little ones bash the heads off each other. However, I digress. Back to the issue at hand, my knockout take on Pork and Beans.

Everything you will need for a healthy ‘Pork and Beaner’, modern style.

I was encouraged by a recent Spanish style recipe that included butter beans. This time I thought we should go a few extra rounds and also include cannellini beans, red kidney beans, aduki beans and, to prove that I am not a racist, chick peas. The rest of the ingredients are as follows:

* The Portuguese chorizo was a present brought back by my good friend Rodrigo, who hails from those parts. I wouldn’t recommend challenging him to slip on the gloves as he stands a good six and a half feet tall (and nearly as wide) and enjoys a physical contest.

Round One
Season the flour with the salt and pepper. Roll the pork in this and fry it in a large casserole dish to brown it. 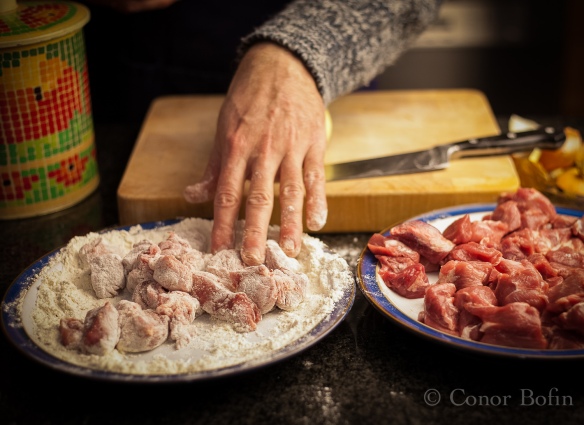 The pork gets a good coating of seasoned flour.

While this is going on, chop the onions nice and small. Then do likewise with the garlic.

Multitasking. Slicing the onions while the first batch of pork browns.

Round Two
Slice the chorizo and pancetta.

The really delicious smoked chorizo was almost too tasty to put in the stew. Almost.

A totally gratuitous slicing shot. I could not resist it.

Then fry these in the same casserole, to release some fat and flavour. 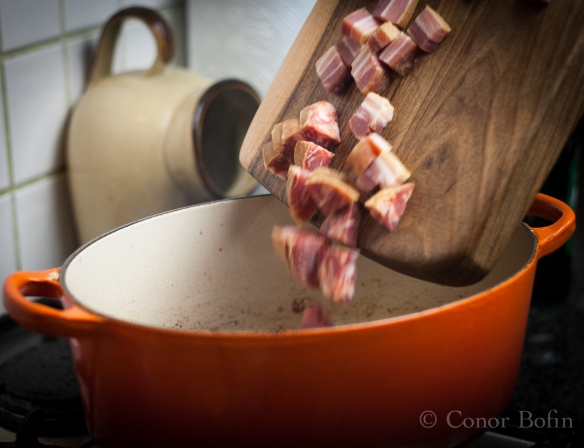 The pouring shot. This probably contains everything a blog photo needs. Meat and pouring.

Then add the onions and garlic. (There would never be enough fat in these to fry the seasoned pork, in case you were wondering).

Round Three
When the onions have been softened up, (like the unfortunate ‘Pork and Beaner’ of old), add back the browned pork and start working in the flavours. First reconstitute the homemade stock. Or, add a chicken stock cube to a pint of water if you must.

Proving that I made my own stock from my reduced chicken stock.

Then add the tomatoes. 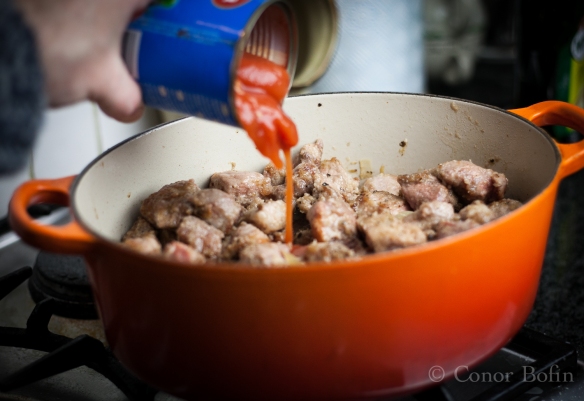 Given that we have to add 5 tins of beans (and peas), that pot is looking a bit small.

Add the tomato purée, Make a decision about the size of the casserole.

Next, add the chicken stock. 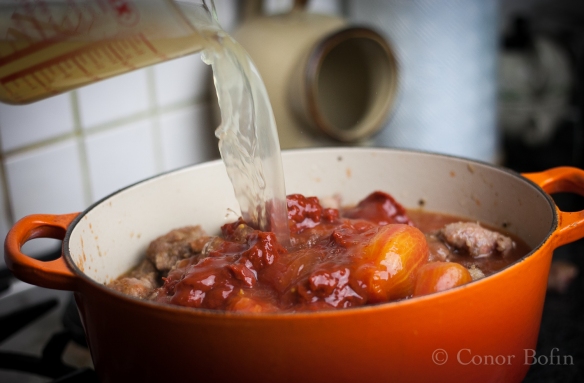 Crunch time. I was forced to use a bigger casserole.

At this stage, if you used a medium casserole, you will be up against the ropes while you realise that you need to use a bigger casserole, if all those beans are going to fit.

Round Four
Transfer everything to a bigger casserole and then add the paprika and bay leaf.

PLENTY of room for all the beans now. What an idiot I am for using the smaller one.

Let this stew for about an hour. This will give the flavours plenty of time to get acquainted. While this is going on, open the tins and rinse the beans and peas. 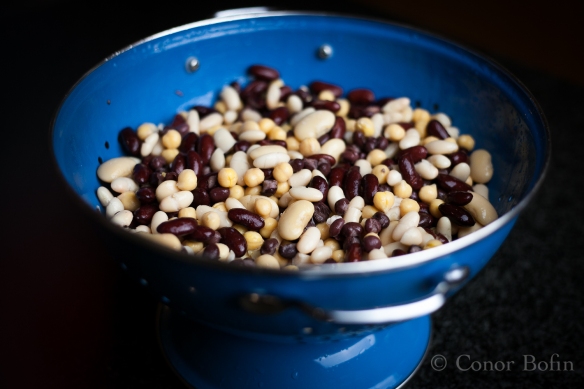 That’s an awful lot of beans and peas. Good thing I used a big pot!

Pour the beans and peas into the stew. 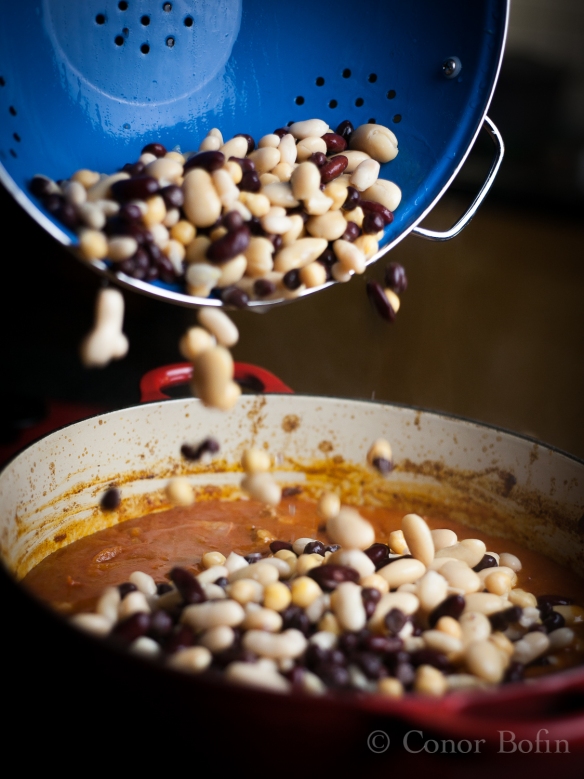 Any excuse for a pouring shot….

Let the beans and peas warm through.

Round Five
Serve the stew to any Pork and Beaners that may be hanging around ringside. They will appreciate it.

This is really worth working up a sweat over. Even if you don’t do it in the boxing ring.

Going against my instincts to cook a pretty exotic fruit stuffed pork steak.

My Beef With Roast Rib Of Beef